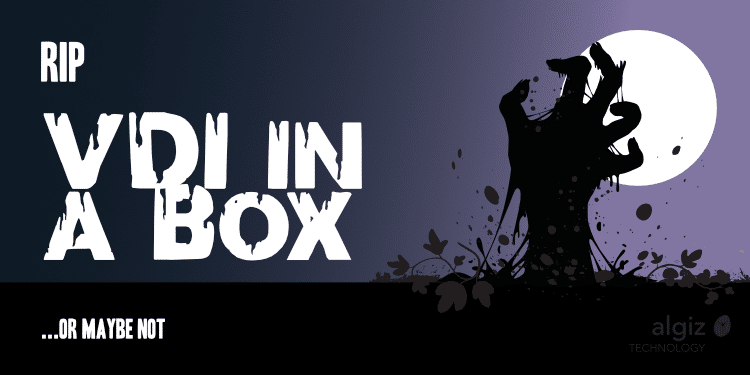 VDI wasn’t meant to be so complicated

During its inception in the early days, desktop virtualisation or virtual desktop infrastructure (VDI) to give it its proper name, was seen as a magic bullet to give IT departments huge operational efficiencies and cost savings by getting rid of end-user machine CapEx costs.

The reality turned out to be slightly different because of the complicated nature of the technology. However, since organisations are constantly looking to reduce cost and deliver a rich user-experience, there is still a need for this technology but with much-reduced complexity.

Back in 2009 a small start-up called Kaviza took up the challenge and made the first real attempt at simplifying VDI, with ‘VDI-in-a Box‘, which very quickly became a real alternative to the dominant players at the time, Citrix with their XenDesktop product and VMware with their View product.

Back then, and still true today, Citrix and VMware took a very similar approach to providing a VDI solution. Both vendors had a bare metal, or Type 1, hypervisor and a connection broker to direct incoming user requests to the appropriate virtual disk image. Both provided a browser-based management tool for creating, updating, and managing the virtual desktop images and assigning the virtual machines to users. Each vendor also provided its own remote display protocol.

Regardless of which solution you choose you need to use load balancers, portals, brokers, databases, licensing servers, provisioning servers, SAN/NAS, and other components. So the key adoption challenges are:

Kaviza designed and built a grid architecture for VDI. Each node in the grid (a server with appropriate resources) was identical and collapsed the entire VDI stack into a single node. A customer could deploy one node and deliver VDI to 50 users and then scale it by just adding more nodes.  The grid of nodes automatically load balanced the virtual desktops amongst themselves, provided high availability and was managed as one logical system. It was simple to deploy and manage as Gabe Knuth pointed out in his article “If you’re curious about VDI-in-a-box, and you have a free day (or even afternoon), you should be able to get it up and to run pretty easily.”

The rise and fall of VDI-in-a-Box

Citrix acquired Kaviza back in May 2011 and was lauded for gaining a VDI product that was easy to install and operate. The suspicion that the acquisition was nothing more than an attempt to eliminate the competition proved to be true when Citrix announced the demise of VDI-in-a-Box earlier this year.

Many of the organisations who loved it have been left with a stark choice – stay with an unsupported system, migrate to XenDesktop or View and loose the simplicity or find an alternative.

Due to advances in many of the component technologies, Workspot, a startup founded by many of the same people who built VDI technologies at Citrix and VMware, has gone further in simplifying VDI than even Kaviza did. Hyper-converged appliances and their new cloud-native architecture allow them to deliver unprecedented levels of scalability, availability, security AND OF COURSE SIMPLICITY.

Don’t get me wrong; the complexity is right there under the hood, it’s just been designed to never get in your way regardless of whether you’re a local college or a giant multinational.

With Workspot you don’t need to provision brokers, web interfaces, load balancers and no new processes to manage your golden images.

Virtualization expert Rory Monaghan describes the flexibility it gives you as follows, “Imagine this; you get a few Nutanix or Atlantis boxes to run your desktops, they are awesome for VDI due to having built-in de-duplication, they also have their own nice hypervisor now too. You can plugin a box and have thousands of VM’s up and running within hours. Just plugin in your network cable, build out your virtual desktops and then configure Workspot to point to your environment.

You’ve simplified setup, and you’ve now got a ‘set it and forget’ infrastructure for running the virtual desktops. By using Workspot with your Nutanix, Atlantis or possibly VMware boxes, you are removing the need to setup and manage an infrastructure for hosting web services for management tools; you also remove the need to setup provisioning tools, load balancing products or brokering services.

Workspot leverages RDP; there’s no extra infrastructure or protocols required. With a hyper-converged solution, scaling with Workspot is as simple as plugging in a new appliance.”

If your image is ready, Workspot takes about an hour to set up and deliver your first desktop.